Culture represents the values, traditions and behaviors of a society, and though culture is improvable, it is not perfectible. And even where positive change occurs, it’s difficult to perpetuate, largely because the people needed to sustain the change are few, flawed and temporary. A society’s culture is no better or worse than its leaders and the citizenry who support them; and at the heart of every problem is the problem of the heart. Apart from regeneration and a transformed mind and will, people will default to selfishness and sin, and so social problems continue. Furthermore, if we did make great improvements, we cannot guarantee succeeding generations will follow the good pattern set for them. Below is a NT example in Acts 19 of how the city of Ephesus was improved culturally from the bottom up, as a result of the apostle Paul’s preaching the gospel and biblical teaching over several years. 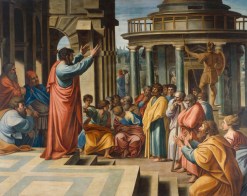 The apostle Paul came to the city of Ephesus, and as was his custom, “he entered the synagogue and continued speaking out boldly for three months, reasoning and persuading them about the kingdom of God” (Acts 19:8). Paul’s normal ministry pattern was to preach to Jews first, then to Gentiles (Rom. 1:16; cf. Acts 13:46; 17:2; 18:4, 19). However, there were some Jews with negative volition who rejected Paul’s teaching, who “were becoming hardened and disobedient, speaking evil of the Way before the people” (Acts 19:9a). Paul did not argue with them, nor did he try to force his teaching on them. Rather, “he withdrew from them and took away the disciples, reasoning daily in the school of Tyrannus” (Acts 19:9b). It’s very possible Paul was renting a room at the school in order to host his daily Bible classes. Luke tells us, “This took place for two years, so that all who lived in Asia heard the word of the Lord, both Jews and Greeks” (Acts 19:10). Though Paul was teaching, he continued to work with his hands to support himself and his traveling companions (Acts 20:34), and it’s possible the seven churches of Asia were started as a result of Paul’s ministry in Ephesus (Acts 19:10; Rev. 2-3). In addition to Paul’s teaching, we learn “God was performing extraordinary miracles by the hands of Paul, so that handkerchiefs or aprons were even carried from his body to the sick, and the diseases left them and the evil spirits went out” (Acts 19:11-12). In this way, God was authenticating Paul’s apostolic authority and validating him as a true servant of the Lord. Ephesus was a city known for its occult practices, and there were some unbelievers who thought they could borrow the name of Jesus and use it to advance their own agendas. We learn there were some “Jewish exorcists, who went from place to place, [and] attempted to name over those who had the evil spirits the name of the Lord Jesus, saying, ‘I adjure you by Jesus whom Paul preaches’” (Acts 19:13). These men were identified as “Seven sons of one Sceva, a Jewish chief priest, were doing this” (Acts 19:14). But the results were not what they expected, as “the evil spirit answered and said to them, ‘I recognize Jesus, and I know about Paul, but who are you?’” (Acts 19:15). The question implied they had no authority, “And the man, in whom was the evil spirit, leaped on them and subdued all of them and overpowered them, so that they fled out of that house naked and wounded” (Acts 19:16). Though these exorcists tried to use the name of Jesus in the form of a verbal incantation to control evil spirits, it backfired on them and caused personal harm, and the event “became known to all, both Jews and Greeks, who lived in Ephesus; and fear fell upon them all and the name of the Lord Jesus was being magnified” (Acts 19:17). The failure of these Jewish exorcists became widely publicized and began to draw people to hear the Christian message. Furthermore, many of “those who had believed kept coming, confessing and disclosing their practices” (Acts 19:18). Those who “had believed” were Christians who had not completely let go of some of their pagan practices, but now they were willing. Luke records, “And many of those who practiced magic brought their books together and began burning them in the sight of everyone; and they counted up the price of them and found it fifty thousand pieces of silver” (Acts 19:19). Though it took nearly two years, these Christians were finally willing to let go of their past practices by burning their magic books and turning fully to the Lord. The value of these books totaled a large financial sum, as each piece of silver was probably equal to a day’s wage. “Ephesus was known for its magic, and apparently the Christians had not yet put away all such evil practices. So they brought their books and scrolls of magic and burned them as an open repudiation. Then—after the believers made their relationships with the Lord right—the Word of God grew and prevailed.”[1] The result was that people were being transformed from the inside out and Ephesian culture was positively impacted for Christ, as “the word of the Lord was growing mightily and prevailing” (Acts 19:8-20). Here we see cultural improvement in the lives of those who were positive to gospel preaching and biblical teaching. 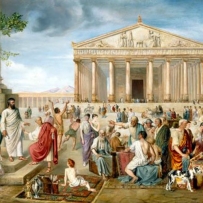 These events marked the high point of Paul’s ministry in Asia. However, some pagan craftsmen who made their living selling statuettes of Artemis felt threatened by the cultural changes that were taking place (Acts 19:23-27). Acting out of rage and economic self-interest, they formed a mob and stormed the city theater, even dragging along Gaius and Aristarchus, two of Paul’s traveling companions, who undoubtedly felt threatened by the uproar (Acts 19:28-29). Paganism has no real answers to Christianity, and when threatened, many will resort to violence to suppress the advance of truth. Though Paul wanted to address the mob, he was prevented by friends who were concerned about his safety (Acts 19:30-31). The riot lasted for several hours with great intensity (Acts 19:32-34), until eventually the crowd tired out, at which time a city official reasoned with them to bring their complaints to the courts, where matters could be handled lawfully and peacefully (Acts 19:35-41). These events likely occurred between 52-55 AD. We know Paul was marked by these events (2 Cor 1:8-9), and by the end of his ministry around 62-64 AD, everyone who once supported him in Ephesus turned away from him (2 Tim 1:15). By 95 AD the church in Ephesus had grown cold and lost its “first love” (Rev 2:4).

In In Acts 19:8-41 we observe that gospel preaching and biblical teaching can, over time, bring about positive cultural change. However, we must keep our focus on evangelism and biblical teaching, and not reducing Christianity to a methodological system merely for the purpose of effecting social change (i.e. a social gospel). We also observe in Acts 19 that when Christianity does bring about positive cultural change, it threatens those who love and live by their paganism, and when this happens, people may resort to violence to suppress the biblical teaching. Lastly, gospel preaching and biblical teaching does not always yield large or lasting results. Remember that Noah preached for 120 years, but only seven persons besides himself were saved (2 Pet 2:5), and Jeremiah preached for 23 years to the same group of leaders in Israel, but they refused to listen (Jer 25:3). Jesus came as the Light into the world, but the majority of those who heard and saw Him rejected His message, as they “loved the darkness rather than the Light” (John 3:19). Jesus informed us that “the gate is wide and the way is broad that leads to destruction, and there are many who enter through it” (Matt 7:13), whereas “the gate is small and the way is narrow that leads to life, and there are few who find it” (Matt 7:14). The result is that there will continually be believers and unbelievers in the world, as the wheat and tares will grow side by side until Jesus returns and establishes His earthly millennial kingdom (Matt 13:36-42). Even Paul did not always get the same results in each city where he preached, for though he had many disciples in Iconium, Lycaonia, Lystra and Derbe (read Acts 14), there were only two positive responses in Philippi, namely Lydia (Acts 16:14-15), and the Philippian jailer (Acts 16:27-34). As Christians, we are more concerned about our godly output rather than the responsive outcomes of those we interact with; for though we can control our godly life and good message, we cannot control how others will respond to it.

Lastly, we live in the reality that there will always be resistance to God’s work in every Christian ministry because the world is fallen and Satan desperately wants to keep everyone—both saved and lost—thinking and acting according to his world-system. New Christians will inevitably face many obstacles, because at the moment of salvation, their minds are not automatically filled with Scripture and their characters are not instantly changed to be like the character of Christ. The process of being transformed into the character of Christ and learning to think biblically involves many thousands of decisions over a lifetime, in which worldly viewpoint is driven from the mind as the believer’s thinking is renovated and brought into conformity with Scripture. Without regeneration and positive volition to God and His Word, biblical discussion is hindered and the appropriation of Christian values to culture is not possible. Christians who are learning God’s Word and growing spiritually will prove to be the moral fabric of any community, as they manifest the highest and best virtues within society, not the lowest and worst. And the Bible is our sword by which we destroy spiritual and intellectual strongholds, within ourselves and others (2 Cor 10:3-6), realizing true cultural change occurs through preaching the gospel and consistent biblical teaching. As Christians, we should always pray for our leaders (1 Tim 2:1-2), strive to be upstanding citizens (Rom 13:1-7; Tit 3:1; 1 Pet 2:13-14), help the needy in our communities (Acts 20:35; 1 Thess 5:14), and above all, share the gospel and preach God’s Word (1 Cor 15:3-4; 2 Tim 4:1-2). As we grow spiritually and walk with God, we stand in opposition to Satan’s world-system and sow the seeds of spiritual insurrection in the lives of those who live and walk in his kingdom of darkness. We disrupt Satan’s kingdom when we share the Gospel (1 Cor 15:3-4), and influence the thoughts and lives of others through biblical discussion (Matt 28:18-20); which we do in love and grace (Eph 4:14-15; Col 4:6), not by argumentation (2 Tim 2:24-26).

Dr. Steven R. Cook is a Christian educator. He is protestant, non-charismatic, and dispensational. Studies in the original languages of Scripture, ancient history, and systematic theology have been the foundation for Steven’s teaching and writing ministry. He has written several Christian books, dozens of articles on Christian theology, and recorded more than seven hundred hours of audio and video sermons. Steven currently serves as professor of Bible and Theology at Tyndale Theological Seminary, and hosts weekly Bible studies at his home in Texas.
View all posts by Dr. Steven R. Cook →
This entry was posted in Bad Behavior, Christian Theology, Church, Hot Topics, Leadership, Living by Faith, Righteous Living, Suffering & Persecution and tagged Acts 19 and Paul preaching in Ephesus, Acts 19:8-41, Are there any biblical examples where society was made better, Biblical examples of improving culture, Biblical examples of making society better, Biblical teaching on how to improve society, Does the Bible give ways we can make society better, Finding the lost scroll in the temple, How can Christians improve culture, How can Christians improve society, How can Christians make American better, How to improve culture, Paul preaching in Ephesus, Paul teaching at the school of Tyrannus, Sharing the gospel to make society better, The riot that occurred in Ephesus, Ways Christians can improve American society, Ways to improve culture, What does the Bible say about improving culture. Bookmark the permalink.