The universe originates with God.  The opening verse of Scripture states, “In the beginning God created the heavens and the earth” (Gen. 1:1).  Creation has features of design because of its infinitely wise Designer.  The Lord created and holds His universe together by His own power (Col. 1:17; Heb. 1:3).  All the members of the trinity were involved in the creation: God the Father (Heb. 1:2), God the Son (John 1:3; Col. 1:16-17), and God the Holy Spirit (Gen. 1:2).  God the Holy Spirit (Heb. Ruach Elohim) appears in the second verse of Genesis, which states, “And the earth was formless and void, and darkness was over the surface of the deep; and the Spirit of God was moving over the surface of the waters” (Gen. 1:2).  From other Scriptural passages we learn that creation came into being by, for, and through God the Son.

For by Him [Jesus] all things were created, both in the heavens and on earth, visible and invisible, whether thrones or dominions or rulers or authorities—all things have been created by Him and for Him. And He is before all things, and in Him all things hold together. (Col. 1:16-17)

God [the Father], after He spoke long ago to the fathers in the prophets in many portions and in many ways, in these last days has spoken to us in His Son [Jesus], whom He appointed heir of all things, through whom also He made the world. (Heb. 1:1-2) 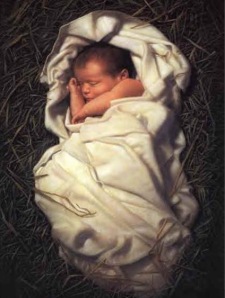 I imagine when God the Son created Adam and Eve in the Garden of Eden, He chose their features carefully, knowing a day would come when He would take a body to Himself.  Nearly four thousand years after the creation of Adam and Eve, Jesus was born into history, into time and space, “And the Word became flesh, and dwelt among us, and we beheld His glory, glory as of the only begotten from the Father, full of grace and truth” (John 1:14).  Jesus was born into the human race of Adam (Luke 3:38), in the line of Abraham and David according to biblical promise (Gen. 12:1-3; 15:6; 2 Sam. 7:16).  He was truly human in that He was born of a human, but He was truly unique in that He is truly God and knew no sin (John 1:1, 14; 20:28; Heb. 4:15).  The One who created humanity became a part of humanity, and the virgin conception by means of the Holy Spirit kept Him free from original sin.  To His human mother, Mary, it was said, “The Holy Spirit will come upon you, and the power of the Most High will overshadow you; and for that reason the holy Child shall be called the Son of God” (Luke 1:35).

Jesus came into the world for a specific purpose, to save us from our sins that we might have salvation and be called children of God.  The apostle Paule writes, “But when the fulness of the time came, God sent forth His Son, born of a woman, born under the Law, in order that He might redeem those who were under the Law, that we might receive the adoption as sons” (Gal. 4:4-5).  Jesus came into the world and lived a righteous life that He might die a substitutionary death in place of sinners.  His atoning death—His shed blood on the cross—paid the redemption price for us that we might receive forgiveness of sins and the free gift of salvation by grace alone through faith alone (Eph. 1:7; 2:8-9).  The worst of sinners are saved by faith alone in Christ as Savior (Rom. 5:6-10).  We need only trust Christ as Savior, believing He died for our sins, was buried, and raised again the third day according to the Scriptures (1 Cor. 15:3-4).

Dr. Steven R. Cook is a Christian educator. He is protestant, non-charismatic, and dispensational. Studies in the original languages of Scripture, ancient history, and systematic theology have been the foundation for Steven’s teaching and writing ministry. He has written several Christian books, dozens of articles on Christian theology, and recorded more than seven hundred hours of audio and video sermons. Steven currently serves as professor of Bible and Theology at Tyndale Theological Seminary, and hosts weekly Bible studies at his home in Texas.
View all posts by Dr. Steven R. Cook →
This entry was posted in Biblical Worldview, Creationism and tagged Creation not evolution, creation of heaven and earth, Creationism, Genesis 1, God created the heavens and the earth, God the Holy Spirit, Jesus Creator, Jesus the Creator, Jesus the redeemer, Jesus the Savior, Jesus the Son of God, Six days of creation. Bookmark the permalink.

2 Responses to Jesus, Creator and Savior