A Brief Analysis of Israel in History and Prophecy 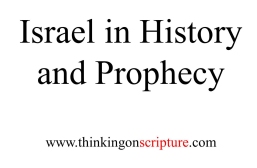 The history of Israel starts with God who chose the nation to be His representatives from eternity past. Israel was created by God (Isa. 43:1, 15), and He loves them with an everlasting love (Jer. 31:1-3). God chose them because of who He is, not because of any greatness or goodness in them (Deut. 7:6-8). Israel began with a unilateral covenant which God made with Abraham, promising “I will make you a great nation” (Gen. 12:2). The Abrahamic covenant was later expanded with the Land Covenant (Deut. 29:1-29; 30:1-10), the Davidic Covenant (2 Sam. 7:16; Ps. 89:3-4, 34-37), and the New Covenant (Jer. 31:31-34). Though Abraham had children by different women (Sarah, Hagar, and Keturah), the Abrahamic promises were restated only through Isaac (Gen. 17:19-21) and Jacob (Gen. 28:10-15). Because of a crippling encounter with God, Jacob’s name was changed to Israel, which means “he who wrestles with God” (Gen. 32:24-30). The sons of Israel (i.e. Jacob) went into captivity in Egypt for four hundred years as God had foretold (Gen. 15:13), and remained there until He called them out through His servants Moses and Aaron (Ex. 3:1-10). God delivered Israel from Egyptian bondage through a series of ten plagues that destroyed Pharaoh and the nation (Exodus chapters 5-14). Then God entered into a bilateral covenant relationship with Israel at Mount Sinai (Ex. 19:1-8), and gave them 613 commands—which comprise the Mosaic Law—and these commands are commonly divided into moral, civil, and ceremonial codes. Under the Mosaic Law, Israel would know blessing if they obeyed God’s commands (Deut. 28:1-15), and cursing if they did not (Deut. 28:16-68). The nation of Israel remained in the wilderness for forty years while God tested and humbled them (Deut. 8:2-5). After Moses died, God brought the Israelites into the land of Canaan (i.e. the land promised to Abraham) under the leadership of Joshua (Deut. 31:23; Josh. 1:1-9), and there the land was divided, giving a portion to each of the descendants of Jacob. After Joshua died (Josh. 24:29-31), Israel repeatedly fell into idolatry and suffered divine discipline for their rebellion (read Judges). This went on for nearly 300 hundred years as Israel fell into a pattern of idolatry, after which God would send punishment, then the people would cry out to God, Who would relent of His judgment and send a judge to deliver them, then the people would serve God for a time, and then fall back into idolatry. The period of the Judges is marked by people who did not obey the Lord, but “did what was right in their own eyes” (Judg. 17:6; 21:25). Samuel was the last of Israel’s judges, and then the people cried for a king because they wanted to be like the other nations (1 Sam. 8:4-5). God gave them their request (1 Sam. 8:22), and Saul became the first king in Israel (1 Sam. 10:1). Though Saul started well, he quickly turned away from the Lord and would not obey God’s commands. Saul reigned for approximately 40 years and his leadership was basically a failure (1 Sam. 13:1; cf. Acts 13:21). Later, God raised up David to be king in Israel (1 Sam. 16:1-13), and David reigned for 40 years and was an ideal king who followed God and encouraged others to do the same (1 Ki. 2:10-11). God decreed David’s throne would be established forever through one of his descendants (2 Sam. 7:16; Ps. 89:3-4), and this is Jesus (Luke 1:31-33). Solomon reigned for 40 years after David (1 Ki. 2:12; 11:42-43), and though He was wise and did many good things (ruled well, built the temple, wrote Scripture, etc.), he eventually turned away from God and worshiped idols (1 Ki. 11:1-10), and the kingdom was divided afterward (1 Ki. 11:11-41). The nation was united under Saul, David, and Solomon.

Solomon’s son, Rehoboam, ruled over the two southern tribes (Judah) and Jeroboam ruled over the ten northern tribes (Israel). Israel—the northern kingdom—had 19 kings throughout its history and all were bad, as they led God’s people into idolatry (i.e. the “sins of Jeroboam” 1 Ki. 16:31; 2 Ki. 3:3; 10:31; 13:2). The ten northern tribes came under divine discipline because of their idolatry and were destroyed by the Assyrians in 722 B.C. Judah—the southern kingdom—had 20 kings throughout its history and 8 were good (some more than others), as they obeyed God and led others to do the same (they were committed to the Lord like David, 1 Ki. 15:11). However, Judah repeatedly fell into idolatry—as the 10 northern tribes had done—and were eventually destroyed by the Babylonians in 586 B.C. The dispersion of Israel was promised by God if they turned away from Him and served other gods (Deut. 28:63-68). Since the destruction by Babylon, Israel has been under Gentile dominance (Luke 21:24; Rom. 11:25). After a temporary regathering under Ezra and Nehemiah, Israel continued under Gentile dominance with the Medes & Persians, Greeks, and Romans. Because of their rejection of Jesus as Messiah, God disciplined Israel again in A.D. 70, and the Jews were scattered all over the world (Jam. 1:1; 1 Pet. 1:1). Israel’s current state is one of judgment (Matt. 23:37-39), and a “partial hardening” (Rom. 11:25).

For nearly 1900 years God has faithfully kept His word to disperse Israel because of their idolatry (Deut. 28:63-68) and their rejection of Jesus as Messiah (Matt. 23:37-39). Now, since 1948, Israelites are back in the Promised Land; even though the majority of them are atheists who reject God. This could be a fulfillment of prophecy in which God has regathered His people before the time of the judgment of the Tribulation (Ezek. 20:33-38; 22:17-22; Zeph. 2:1-2). Logically it makes sense that God will regather Israel as a nation (Ezek. 36:22-24) before He regenerates them and gives them a new heart (Ezek. 36:25-28). Dr. Arnold Fruchtenbaum argues two regatherings of Israel. The first is a regathering of Jews in unbelief, which sets the stage for the Tribulation. The second regathering is in belief, which prepares them for Messiah, who will rule over them during the millennium.

As Christians, we are glad to see Jews returning to the Promised Land and support the nation of Israel. This support is by no means a blanket endorsement of all Israel does, for the nation may behave immorally like any other nation. However, we recognize that God is working to set the stage for prophetic events, and that Israel being in the Promised Land is a part of that.

Covenant theologians often argue that God has already fulfilled His promise to Abraham that his descendants would possess the land (see Josh. 21:43-45; 1 Ki. 4:21; Neh. 9:8). God was faithful to bring Abraham’s descendants into the Promised Land, and though they eventually came to control much of it under the reign of Solomon (1 Ki. 4:21-24), they did not possess it all, and this seems plain from other biblical passages where Israelites had to fight the old residents still in the land (Josh. 23:5-7; Judg. 1:21, 27-28).

Furthermore, it was stated in Scripture that Abraham personally would possess the land, and that he and his descendants would possess it forever. Several times God said to Abraham, “For all the land which you see, I will give it to you [Abraham] and to your descendants forever” (Gen. 13:15), “Arise, walk about the land through its length and breadth; for I will give it to you [Abraham]” (Gen. 13:17), and “I will give to you [Abraham] and to your descendants after you, the land of your sojournings, all the land of Canaan, for an everlasting possession; and I will be their God” (Gen. 17:8). Yet, Abraham has never possessed the land that was promised to Him. In fact, Stephen makes this very point in his speech in Acts, where he says, “But He [God] gave him [Abraham] no inheritance in it [the land], not even a foot of ground, and yet, even when he had no child, He promised that He would give it to him as a possession, and to his descendants after him” (Acts 7:5).

During his lifetime, Abraham did not possess the land God promised to him. But God will keep His word to Abraham and his descendants. God will, in the future, through resurrections, give both Abraham and Israel possession of all the Promised Land, and they will possess it forever. In addition, Israel will benefit from all the blessings of the New Covenant which are stated in Scripture (Jer. 31:31-34). Lastly, the nation of Israel will be blessed when Jesus, the Jewish Messiah, will be seated on His throne in Jerusalem, ruling over them “forever” (2 Sam. 7:16; Ps. 89:3-4, 34-37; Luke 1:31-33; cf. Matt. 19:28; 25:31).

Here’s an audio lesson that goes with this article:

Dr. Steven R. Cook is a Christian educator. He is protestant, non-charismatic, and dispensational. Studies in the original languages of Scripture, ancient history, and systematic theology have been the foundation for Steven’s teaching and writing ministry. He has written several Christian books, dozens of articles on Christian theology, and recorded more than seven hundred hours of audio and video sermons. Steven currently serves as professor of Bible and Theology at Tyndale Theological Seminary, and hosts weekly Bible studies at his home in Texas.
View all posts by Dr. Steven R. Cook →
This entry was posted in Christian Theology, Dispensationalism, Hermeneutics, Israel, Prophecy and tagged Are the biblical covenants still in effect?, Biblical Covenants, biblical promises, covenant promises, Dispensational theology and Israel, Does Israel have a future?, Dr. Andy Woods, Dr. Arnold Fruchtenbaum, God loves Israel, God promised the land to Israel, Has God already fulfilled His promises to Israel?, Israel future, Israel in history, Israel in History and Prophecy, Israel in prophecy, Israel present, Isreal past, Jesus is the promised Messiah, Jesus will sit on David's throne, The Abrahamic covenant, the Abrahamic promises, The future of Israel, What is Israel's future?. Bookmark the permalink.