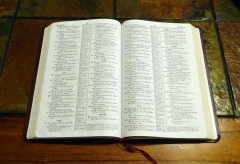 Over the years I’ve had discussions with Christians in America who have made the mistake of thinking we are a Christian nation. The two words Christian and nation are never united in Scripture, nor should they be. America is a great nation in many ways and I love my freedoms, but it is not a Christian nation. The concept of a Christian nation is nowhere found in Scripture. It is true that some of America’s founding fathers where Christians who lived within a biblical worldview, but some were Unitarians (who deny the Trinity), and others were Deists (who deny God’s sovereign involvement in creation). Often those who argue that America is a Christian nation selectively cite the founding fathers, but rarely, if ever, cite Scripture. The Bible alone must guide our faith and conduct. The Church is a biblical concept, but a Christian nation is not. A Christian is one who has trusted in the Lord Jesus as his Savior and received forgiveness of sins (Eph. 1:7), the gift of eternal life (John 3:16; 10:28), and the imputation of God’s righteousness (Rom. 5:17; 2 Cor. 5:21; Phil. 3:9). A local church consists of Christians who gather on a regular basis for Bible study, fellowship, partaking of the Lord’s Supper and prayer (Acts 2:42). America is not a giant church made up of Christians.

…the locus of God’s people under the new covenant is not a nation, and every attempt to establish a unified “Christian nation,” where the respective boundaries of church and state are made to coalesce, has not only been misconceived but has resulted in disastrous failure.[1]

Scripture never directs the Christian to establish Christian laws for any nation. Scripture calls us to proclaim the message of Christianity and to win men with words, never social or political force. We have failed as Christians as soon as we seek to politicize our message and control others through legislative means. If Christians want to have a lasting impact on a nation, it must be done at the grassroots level through evangelization and biblical teaching, not legislation. It must done through sharing the gospel and teaching Christian virtues that are applied to all of life, not by a forced morality imposed through the halls of congress.

Historically, Christians in America have been a positive influence in society by promoting law and being charitable to the needy (Gal. 2:10; Jam. 1:27). They’ve built schools, hospitals, orphanages and other helpful organizations that lift man up. They’ve fed the hungry, cared for the sick, housed the homeless, provided for widows and orphans, and visited prisoners with the gospel. Christians have also promoted art, literature, music and science. Certainly there have been abuses in the name of Christianity; however, the historical record speaks favorably about Christian service. For the most part, believers have obeyed Scripture and become law abiding citizens rather than rebels. Scripture teaches Christians to think of government as a “minister of God” (Rom. 13:4), to obey leaders (Rom. 13:1, 5; Tit. 3:1; 1 Pet. 2:13-15), pay taxes (Rom. 13:6), regard rulers as “servants of God” who do His will (Rom. 13:6), and to pray for them (1 Tim. 2:1-2). We realize there is a legitimate sense in which the leaders of this world accomplish God’s purposes by keeping harmony and promoting justice (Rom. 13:2-4; 6-7). We do not blindly submit to their authority and should say no to governmental leaders when they command us to go against the commands of God (see Dan. 3:1-18; 6:1-13; Acts 4:19-20; 5:28-29). The Christian obeys or defies human authority only as the Bible directs. Ultimately, those who obey God’s Word prove to be a blessing that promotes righteousness within a nation. Christians who are learning God’s Word and growing spiritually will prove to be the moral fabric of any community, and this will make a nation strong. Mature Christians will reflect the highest and best virtues within a country, not the lowest and worst.

Dr. Steven R. Cook is a Christian educator. He is protestant, conservative, and dispensational. Studies in the original languages of Scripture, ancient history, and systematic theology have been the foundation for Steven’s teaching and writing ministry. He has written several Christian books, dozens of articles on Christian theology, and recorded more than seven hundred hours of audio and video sermons. Steven currently serves as professor of Bible and Theology at Tyndale Theological Seminary, and hosts weekly Bible studies at his home in Texas. Steven’s ministry activity is entirely voluntary (articles, blogs, podcasts, and video lessons), as he works a full time job as a Case Manager for a local nonprofit agency that helps the elderly and disabled in the community.
View all posts by Dr. Steven R. Cook →
This entry was posted in Christian Theology, Hot Topics, Righteous Living and tagged America, American history, American politics, Changing America, Christian nation, Christian Revisionism, Christians in America, Founding fathers of America, How can Christians change America?, Is America a Christian nation?, Is God mentioned in the US constitution?, Nation under God, Pray for America, rewriting American history, Should Christians be political?, spiritual revival in America, the Bible in America, theocracy, Theocratic Kingdom, US Consitution, Were the founding fathers Christians?, What influence should Christians have in America?. Bookmark the permalink.

17 Responses to Christians in America